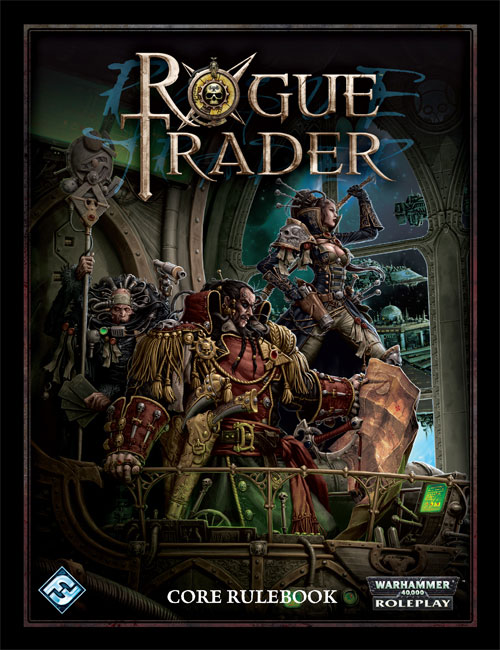 For more than a hundred centuries the Emperor has sat immobile on the Golden Throne of Earth. He is the master of mankind by the will of the gods, and master of a million worlds by the might of his inexhaustible armies. He is a rotting carcass writhing invisibly with power from the Dark Age of Technology. He is the Carrion Lord of the Imperium for whom a thousand souls are sacrifi ced every day so that he may never truly die. Yet in his deathless state, the Emperor continues his eternal vigilance. Mighty battlefl eets cross the Daemon-infested miasma of the warp, the only route between distant stars, their way lit by the Astronomicon, the psychic manifestation of the Emperor’s will. Vast armies give battle in his name on uncounted worlds, but for all their multitudes, they are barely enough to hold off the everpresent threat from aliens, heretics, mutants, and worse. To be a man in such times is to be one amongst untold billions. It is to live in the cruelest and most bloody regime imaginable. Yet you are not just any individual—you are an Explorer on a Rogue Trader ship with authority and freedom far beyond the comprehension of the masses. Empowered by an ancient warrant of trade and a warp-capable ship, you will venture into the uncharted voids, discovering new worlds, lost civilisations, and bizarre alien technology. Fortune and glory are within reach. Rogue Traders stand on the threshold of unlimited opportunity and innumerable dangers.

WHAT IS ROGUE TRADER? In ROGUE TRADER, you will assume the roles of a privateering merchant prince, or “Rogue Trader,” or one of his trusted counsellors. You are empowered by an ancient warrant of trade to seek out profi t and plunder amongst unexplored regions of space, outside the Imperium’s grasp. Your ship will take you to new worlds and uncharted reaches of the void, where you will encounter rivals, pirates, aliens, and possibly even daemons of the warp. You will acquire and spend great wealth and riches, and fame or infamy will follow in your footsteps. You will discover ancient and forgotten mysteries and search out the unknown to fi nd lost human worlds and never before seen celestial phenomena. You must survive the dangers of space, not only the threat of vacuum, cold, and deadly radiation, but the things that lurk in the dark void between stars that man was never meant to fi nd. To be part of a Rogue Trader crew is to stand on the threshold of nearly unlimited opportunity. Vast fortunes await on the edges of the galaxy, if you and your fellow Explorers can muster the courage to fi nd and claim them. Renown and riches reward the bold, but the unwary fi nd only an anonymous death. A Rogue Trader’s true reward lies beyond fame and fortune, however. A Rogue Trader who can take risks and wrest them into profi ts by skill, luck, or sheer force of will enjoys something few humans in the 41st Millennium even know. A Rogue Trader’s life is one of adventure and true freedom, the freedom to choose his course, and to see the consequences of his choices for good or ill. This is not to say, however, that the course is not fraught with peril. Foul aliens, pernicious raiders, and even other Rogue Traders will stand in your way on the path to greatness. Your wits and courage will be tested to their utmost limits. To survive is to face even greater challenges—and to wield even greater power

I'm sorry, but we no longer support this web browser. Please upgrade your browser or install Chrome or Firefox to enjoy the full functionality of this site.